Last week I organized a screening of the motor neuron disease documentary ‘I am breathing’ in Berlin. Produced by a team from Edinburgh, the film screening took place at the Charité and was attended by about thirty people from various walks of life. About half those in attendance were young neuroscientists like myself, and we had an interesting discussion of the movie and the disease behind its production at the end.
Motor neuron disease is not a common neurodegenerative disorder. Despite being rare, the disease (which is actually a combination of several distinct conditions characterized by a specific loss of the nerves that control movement) possesses many unique features that highlight the need to understand it better. First of all, the disease affects those in the prime of their lives so to speak – unlike Parkinson’s or Alzheimer’s disease. It is relentlessly progressive and fatal typically within a few years. Cognition is left completely intact (as is sensation), and thus patients afflicted with MND are usually lucid and aware of the devastating deterioration occurring in their bodies throughout the course of the illness.
On the other hand, the disease also appeals to scientists – it is in fact a very curious malady. It affects motor nerves in the central and peripheral nervous systems indiscriminately, yet spares all other nerve types. It does not improve with currently available treatment strategies which other similar neurological illnesses respond to such as immunosuppressants and immune modulating drugs. This is likely because there is very little inflammation in MND – the nerves simply degenerate and die, with little reaction from the body.
The film itself was very touching. It follows Neil – a man with MND’s final message to his infant son. His sense of humour was remarkably intact throughout his battle with MND, and he consistently made the audience laugh. Although I have a feeling much of the audience might have had some trouble understanding the thick Scottish accents (there were German subtitles also), I think everyone took something from the screening event.

More to come about the film, as well as the screening event soon. I’ve had quite a crazy month with my studies both in Berlin and Edinburgh, and now I’m writing this post while headed to Portugal for a weeklong workshop (which I also hope to find the time to post about soon). Until then, enjoy these photos of the ‘I am breathing’ screening at the Charité in Berlin. 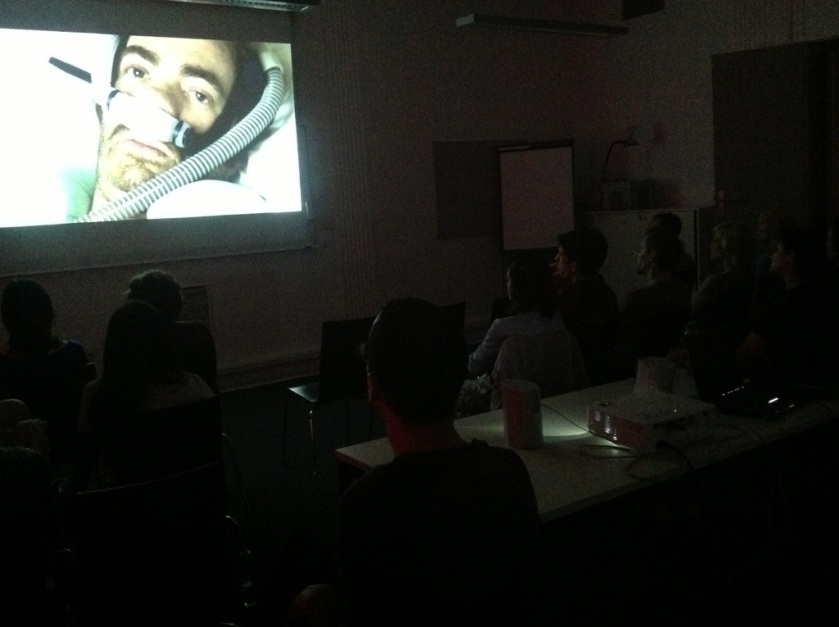